The aluminum stage truss is a structure with constant geometric shape composed of some triangular frames composed of straight rods. The joints between members are called nodes (or nodes). According to the axis of the truss members and the distribution of the external force, the truss can be divided into flat stage truss and space stage truss. Spatial structures such as roof trusses or bridges are composed of a series of parallel plane trusses. If they mainly bear plane loads, they can be simplified as plane trusses for calculation.

The working principle of the aluminum flat stage truss

The axis and the external force of the members that make up the truss are on the same plane. Planar trusses can be thought of as adding members to a basic triangular frame. For every two rods added, a new node must be formed so that the geometry of the structure remains the same. This kind of truss that can maintain geometric solidity is called a redundant rod (or no redundant rod) truss. If you only add members without adding nodes, you cannot maintain the geometric robustness of the truss, which is called a redundant (or redundant) truss. 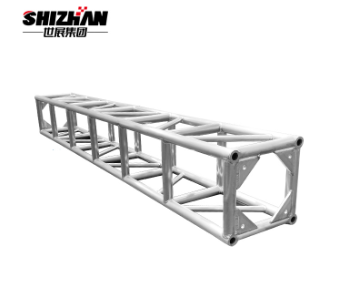 The working principle of the aluminum stage truss is that the axis and the external force of each member of the truss are not on the same plane. In engineering, some space trusses cannot be simplified as plane trusses, such as grid structures. Tower, crane frame, etc. The nodes of the space truss are smooth spherical hinge joints, and the axes of the rods all pass through the spherical hinge center of the connection point and can rotate around any axis of the spherical hinge center. Each node has three degrees of freedom in space. 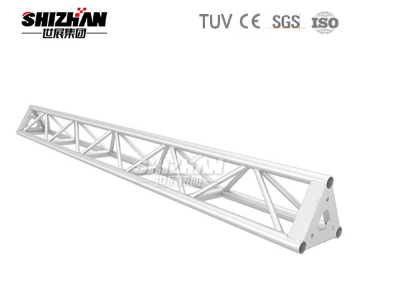 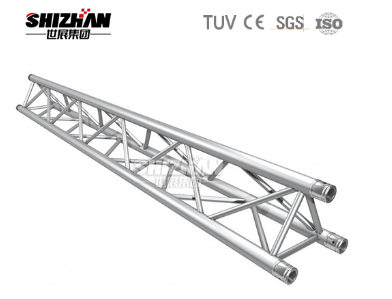 Compared with Triangle Spigot Truss, Trapezoidal Truss has improved the force condition of the rod, and it is easier to meet the process requirements of some industrial plants when used in roofing. If the upper and lower chords of trapezoidal truss are parallel, it is a parallel chord truss, and the load on the rod is slightly worse than trapezoidal truss, but the type of web is greatly reduced, and it is used in bridges and trestle bridges.