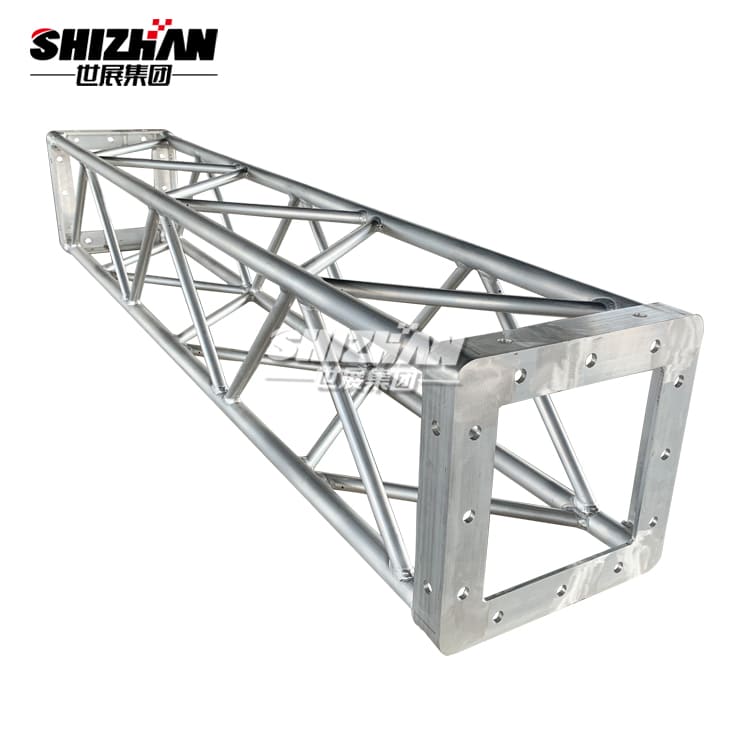 How much do you know about truss installation?

1. First place the four bases at a rough position on the ground and adjust the lower legs so that they are on a horizontal plane;

2. Insert the bottom part of the diagonal support on the outside of the base on the four corners, insert 2 on each corner, a total of 8;
3. Fix the reverse head on the base with screws, and pay attention to the direction of rotation of the reverse head as shown in the figure;
4. Put a square set on the reverse head;
5. Connect the beam on the ground;
6. Connect the two ends of the beam to the two square sleeves on both sides, and then the beam is assembled on the ground;
7. Lay the column truss flat and connect it, and then screw one end to the opposite head, and the other end to the cross arm, and at the same time link the hanging hoist and the cross arm, the role of the hoist is to lift the lower beam truss ;
8. Multiple people slowly erect the column truss together, taking care not to push the column with too much force, and then fix the screws on the reverse head;
9. After the upright is erected, hook the hook below the hoist to the lower beam through the sling;
10. Several people slowly pull the hanging hoist together to pull the beam to a position of about 1.5 meters;
11. Install lighting and sound equipment on the beam;
12. Pull the hoist to the predetermined height again to stop;
13. Tighten one end of the diagonal support and the column, and the other end to the horizontal support of the base, so the TRUSS frame is completed.


Shizhan Group has a large number of popular truss types, and quality is the soul of the World Exhibition Group. It is the key to becoming the right partner for all truss users worldwide.

What is used for stage construction

What should I do with the truss node?